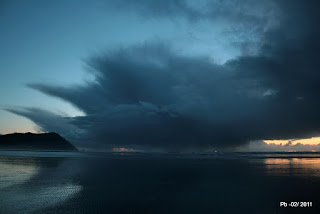 I have often wondered if one can prepare themselves for devastation. Devastation that you know will sooner or later happen inside of you, turning everything you know, everything you believe into crumbles.

It is when you see the tide coming in when you realize the storm is going to hit soon and the only one standing there to welcome it will be you.

So you do what any one does who has been devastated a few times. You start to pretend that everything is ok, you build a little hut, dance around the beach, sip some coconut water. And wait.

You wait - wondering, evaluating, and slowly losing each bit and piece you once knew about yourself, each memory you built into nothingness.

You know that devastation is the process to transformation, you know once the storm is over and everything is washed clean, there will be sunshine, there will be hope and there will emerge someone entirely different inside of you. You know it because you have seen many a storms and tides.

But every once in a while in the wait, when the sand slips in between your fingers and there is just nothing you can do about it. The helplessness of not having control, the sinking of your feet into the sand, all of those things… you wish if you could get into a shell and turtle your way smoothly through the storm, just this one time.

And while the rain starts to fall slowly and no shell magically appears around you, you close your eyes and hope that that emerging person inside of you will somehow have the answer of how to prepare for devastation.
Posted by idletuesdayafternoonthoughts at 12:26 AM 7 comments:

Answers are everywhere, its about opening your eyes to actually see them.
I found this online and it made so much sense, it made so many things clear.
Read on...

I have learned (author unknown)

Posted by idletuesdayafternoonthoughts at 5:50 AM 2 comments: