For as long as I can remember, I have been obsessed with finding the meaning of life and my reason for living it. This has often led to over-thinking, analyzing, anticipating, and making lofty plans that have sometimes resulted in disappointments.

A year and a half ago when I got my second tattoo (You can read about it here) I promised myself to evolve and let life take its natural course without the constant questioning of – why, what, where and when.

For someone who needs to rationalize each situation, it’s not easy to go with the flow. Channeling my obsession in a positive way, over time and with some effort, I found a direction for my growth.

I decided to say ‘yes’ to everything I had previously said ‘can’t’ or ‘will not’ to.

I didn’t just tick of a list of things to do but my soul grew to become perhaps its best version - fearless, calm and eternally joyful.

Today, I got my third tattoo to celebrate this growth and as a reminder of all the pleasant occurrences and in anticipation of the beautiful surprises that await me in this life.

I got the word Serendipity flowing into a paper airplane tattooed on the side of my ribs.

The word ‘Serendipity’ and the airplane have a special meaning for me.

Serendipity (n) means - The occurrence and development of events by chance in a happy or beneficial way.

Looking back, everything that has ever occurred, has made sense sooner or later. The times when I felt I couldn’t survive turned out to be blessings in disguise.

Life has for most of its part, been a series of pleasant surprises when I have let it take its own course and even when I have questioned its workings; it has been kind and grateful.
The word to me is a reminder to believe in the eternal power of the universe that is always working in my favor even when it might not seem like it.

In my tattoo, a paper airplane flows out of the word.

Firstly, It is a physical form of the word serendipity. Paper airplanes don’t have a set course. Paper airplanes go where the wind takes them. The airplane is a reminder for my soul to be free, to go with the flow.

Secondly, the airplane signifies reasons to keep traveling. In the past four years, I have visited twenty countries. To think, I never traveled before is something that now seems alien to me.

I have, especially during my solo travels experienced serendipity in its truest form. The best days have happened without plan or agenda, people have best become friends with conversations that were randomly stuck while sitting on opposite tables and surprises have occurred at every cobbled street.

Traveling has made me richer, smarter, and happier. It has led me to believe that the only moment I might have is the Now and I can’t afford to waste it.

I got this tattoo done in Paros, Greece. The plan was to get this done in Athens but as serendipity would have it, someone I randomly met told me about an artist nearby and soon after the chance meeting, I saw this chalkboard. 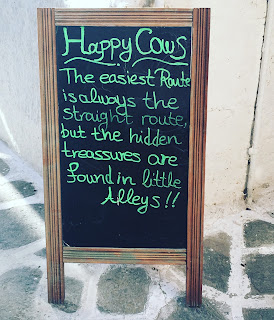 Needless to say, the studio was in a little alley. :-) 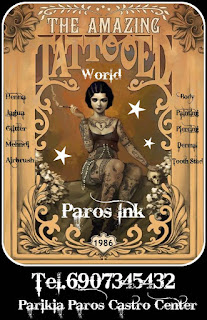 Tattoo Artist – Mario
Studio – Paros Ink
Appointments – Perhaps in the high tourist season it might be best to call or send Mario a Facebook Message.
Note: Mario also runs an Italian restaurant in the evenings hence tattoos are generally done in the mornings.

Posted by idletuesdayafternoonthoughts at 9:54 AM No comments: