For the first fifteen years of my life, I lived in a large, long forgotten colonial home in a scarcely populated area of an average North Indian City. With acres of land and a small fleet of help at our disposal, we did not have a concept of neighbours and after school play dates. Once home from school, my brother and I had to invent our own games like climbing trees and chasing animals to keep our selves entertained.

When tired from running around the compound and bored with my dolls, I would role-play my ideal adult life. I would sneak into my father’s office and have important business discussions with empty chairs. Sometimes I would sit inside our black Premier Padmini car and turn the wheel right and left while having life altering conversations about Barbie Dolls with my pretend family.

Once a week my brother and I would climb up the loft in our room, get into life size trunks that smelled of mothballs and play spaceship. Even though I never said it out loud, in my mind, I was on the moon already.

What a beautiful feeling it is when you truly believe that everything is possible. The certainty, that in the tiny part of the universe that we call our own, anything can be achieved.

In the universe that I inhabited during my growing up years, I was everything I wanted to be but as it happens with each one of us, sooner or later, reality entered my beautiful world. It started with being told that I was not good at spelling. Then I was informed that I couldn’t dodge the ball fast enough so basketball was not for me. Heartbreaks, interview failures etc etc…The list of can’ts and don’ts kept getting longer and deeper as the years flew by.

I took fewer risks and found a comfortable spot that conformed to what everyone else around me told me I could and could not do - believing it to be true.
Over time, that little girl who believed in magic, got lost somewhere in faded photographs.

Decades later, 2014, a year of extremes happened.
So exactly this time last year, in a fragile and extremely low state of mind, I made myself a few promises and one of them was to find myself again.

I made a list of everything I once wanted to do but never ended up doing because I thought I wasn’t good enough. Considering I sucked at it already, how much worse could it get?

In the book – Eat, Pray, Love, Ketut Liyer tells Liz, “Balance is not letting anybody love you less than you love yourself.”

So I decided to take a quantum leap and shift focus on someone I left behind long ago. The little girl who hid in trunks and danced without music.
I had to find her again.

In the course of the year, I learned a new language, traveled to places I hadn't thought of before, started to (actually) enjoy cooking, got my health back on track, put my self out there to meet new people, made some amazing new friends, entertained more, drank less, took a lot more challenges at work, started saying NO if it wasn't good enough, went on a lot of first dates, spent time figuring out what I wanted out of a relationship, tricked my body, tricked fear and most importantly, learned to drive.

While I was learning new skills, something was changing at a deeper level. I was falling in love.

A few weeks ago, I stood in the middle of the Beagle Channel in silence. The only sounds around me were that of yawning sea lions and the slight rocking of a wooden boat. I spread out my arms and took a deep breath of the fresh Antarctic air into my lungs and smiled. 24,000 Kilometres away from everything I own and people I know, I was alone but for the first time in years, I was with myself. I was in love again.

2015 has been beautiful, blessed and a year about the most important person in my universe – me.

I couldn't have done this without the ones who stood by me in the past year and pushed me to be the best version of myself - you are my rocks. Thank you.

And the one’s who led me to this journey. I can't thank you enough.

As we step into another year together, I hope that you too will try and search for that little girl/boy hiding somewhere deep within you and do everything in your power to chase the dreams she/he ever had.
I hope that you will fill each moment with more love and happiness.

Posted by idletuesdayafternoonthoughts at 4:22 AM 2 comments: 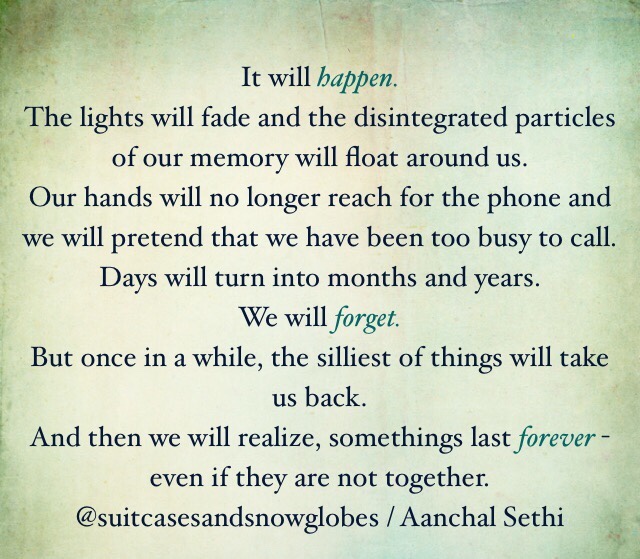 Posted by idletuesdayafternoonthoughts at 5:55 AM No comments: