Twenty freakin seven!!!! On the eve of my twenty seventh birthday, embarking the twenty eighth year of my existence as this person that I have got to know a little bit, but continues to surprise me… I am sitting all alone watching television.

Have I suddenly become old?

In the memories of all the very drunken birthday eve’s and birthdays I have had, I am wondering is 27 really old?

I don’t feel 27. I don’t look 27. But the world is determined to make me feel 27 though. I’m not married, I am at the bottom of the pyramid at a career which I’m not sure I want to be in. I recall a conversation with my mother a few days ago, when she asked me, "where is your life going? You’re 27, do you have a clue of what you want to do?”

I stared at her blankly and answered, “NO, I don’t have one bit of a fucking clue.”

Is it that bad not to have a clue?

Today, I am sitting here all alone, reading the Memory of my melancholy whores by Gabriel Garcia Marquez, watching Slumdog sweep the Oscars (don’t think it deserves the best film though) and thanks to the writers block long gone, writing furiously.

I hope on my 54th birthday (if I live that long). I know what I am doing, what I want to do. I hope as I look back today and wonder; I also look back and wonder at 54 how the hell did I fit all that in one bloody life?!!!!!
Posted by idletuesdayafternoonthoughts at 10:18 AM 1 comment:

Mr. Apte entered my life when I was figuring out what the whole fucking deal about life was! I was living on my own when everyone else I knew was still caged within their cocoons.
I’m sure Mr. Apte rented that room to students to overcome his own loneliness. He was a man of principal. He had the demeanor of a soft spoken old man, but you had to hear him when he was angry. It was scary. Having spent most of his life as a government employee (He was working with the Air India) He had a different class. A bit aristocratic. He would sit in front of the TV for hours on end. He loved eating cabbage bhaji. It’s been eleven years and I still hate the sight of that bhaji I saw every single day.

Sometimes he thought it was his duty to discipline me.
I was never a rebel but I enjoyed my freedom and hated any interference.

I remember times when he would pick up the phone extension and listen to my conversations. Once, he caught me talking to my friend when it was supposed to be my mom and screamed. I cried.

There were times he was sweet though. He took immense care of the schizophrenic servant who stayed with him. Treated him like his own son.
I guess that happens when your own children abandon you.

By the end of the first year I was so engrossed in my new life, college, friends and boy friend that I forgot he existed. I would enter the house, lock my room and stay there. No conversations.
I wonder if I was being a typical teenager or just building a wall between us. I felt guilty at times when I didn’t talk to him for days on end. But there was so much more to do. I didn’t want to waste time talking to a ninety year old.

One day in February 2000 he had a stroke. It was a couple of days after my birthday. His daughter took him to Bombay. I saw him once after that at his home in Bombay. I went to tell him that I had topped my college. I don’t think he recognized me. He passed away soon after that.

I continued to live in that house for another year. It never bothered me that he was not there. I had ignored him long enough.

The years that followed taught me a lot. I became less reckless. I became more sensitive. A couple of years back, one fine day it finally hit me that Mr. Apte had died. I cried.

I think of Mr. Apte once every. That day happens to be my birthday. The old man taught me something I will never forget.
The two birthdays I spent with him were sweet. One year he got the servant to make gajjar halwa and the other year he got me mithai. (I think these were things he secretly wanted to eat! : ) )
On my seventeenth birthday (my first in Pune) He knocked on my door and said, “Wish you a very happy new year!!” I laughed and told him, “Uncle, it’s my birthday.” And he said, “It is a start to everything new, it’s your new year.”
He did the same thing the next year, a couple of days before he had that stroke.

It took me sometime to realize the depth in those words. He was not around for me to tell him that.
Every year on my birthday I remember the complete honestly that man had when he told me that ‘it’s a start to everything new’, it is your new year.’

Every year on my birthday I think of him, wish him well and promise to myself I will not ignore people who care for me.

Every year on my birthday I expect a knock on my door, I wait for someone to say – “Happy new year”
Posted by idletuesdayafternoonthoughts at 2:57 AM No comments: 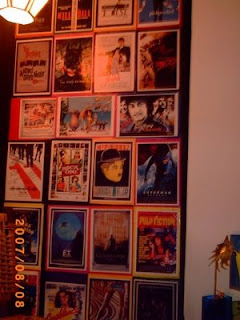 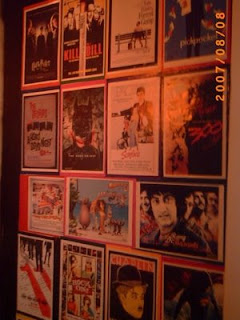 This is a long pending post! I revamped a wall in my room last month and have been meaning to post pictures. The idea is simple and cost me around 750/- INR and three hours to finish the job.
I love films and this is something i wanted to do since a long time. A collage of films I love.
I downloaded posters (very easy - all on google, just need to check the resolution) and got them printed on nice glossy paper.
I actually wanted to paint the wall with acrylic, but ended up buying spray paint. Spray paint is expensive but super cool. It dries in minutes and is so easy to use.
I pasted the posters on bright glaze paper and used fevicol to put them up on the wall ( didn't know that could be done, fevicol actually fixes everything !!)
The corner now looks great with mood lighting and the revamped wall ....
My fav corner to click photographs now :)
Posted by idletuesdayafternoonthoughts at 1:56 AM No comments: 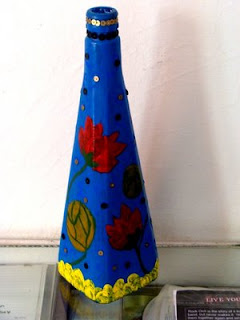 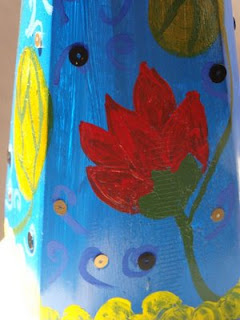 I spent this morning painting a vodka bottle. I love the shape of this vodka bottle (Fuel). The idea was inspired by an artist called Aarohi. I added a little touch by pasting bronze and black sequins randomly.
Posted by idletuesdayafternoonthoughts at 1:28 AM No comments:

A web called my mind.

Void.
Posted by idletuesdayafternoonthoughts at 1:30 AM No comments:

“Open me up and you will see
I’m a gallery of broken hearts
I’m beyond repair, let me be
And give me back my broken parts..” – Ingrid Michealson (Be ok)
Posted by idletuesdayafternoonthoughts at 2:37 AM No comments: