When It Is Father's Day Everyday.

I don't believe in Father’s day, Mother’s day or any other day that has been created by advertisers like me to sell candy and greeting cards. However, last Sunday my timeline on Facebook was cluttered with Father’s day messages. Everyone had a new profile picture that was promptly changed to the original on Monday.

I wished you ‘Happy Father’s Day’ on our regular Sunday call and both of us laughed.
Was that enough? Should I have sent you a card or at least changed my profile picture like my entire friend list was doing?

The truth is that even though we are both extremely sensitive people, we rarely find the right words or actions to show our emotions. I took a long time to understand this about us.

We don't share the relationship I see my friends share with their fathers. We don't praise or shower each other with gifts and overly expressive gestures. We don't sit and have long conversations on things that are happening in our everyday lives. That job is allocated to mom who diligently passes the information around. On the contrary, we discuss finances, investments, travel details, office troubles and life decisions.

After hanging up the call and a little guilty about not expressing my love on Facebook, I got thinking about our relationship and how you have influenced my personality. Even though your presence in my everyday life has always been  a bit passive as compared to mom’s, I know that I wouldn't be the fiercely independent and successful woman I am today if it weren’t for you. Perhaps, it’s not too late to tell you now – Thank you Dad.

Thank you for giving me an infinite thirst for discovery.

When we were growing up, we didn’t have fancy toys and expensive clothes but we always had a holiday to look forward to. Thank you for teaching me that roughing it out in a tent was as important as relaxing in a fancy resort. For pulling up outside school with packed suitcases in the car trunk for an impromptu holiday just because the weather demanded it.

You showed me the value of history, the grandeur of nature and the essence of spontaneity. Thank you for introducing me to the joys of exploration and for always reminding me that there is an endless world to discover.

Thank you for showing me that I should never fear change.

At the age of fifty, you decided to start a new life in a city where you hardly knew anyone. When I wonder where my life is headed these days, I think about you and mom starting from scratch with nothing but your confidence to take you through. Suddenly, it all seems so easy and achievable. Thank you for teaching me that it is never to late to take control and change the course of your life, make new friends, get a new career and start again.

Thank you for giving me a thirst for adventure.

You often tell people that I inspired you to sky dive on your sixtieth birthday. The truth is you inspired me to take the rock-climbing course, to hike, to paraglide and to sky dive. Every Sunday, as a kid, when I would sit with the big trunk of old photographs, I would go through your mountaineering pictures and wonder if I would ever climb a glacier like you did. Dad, I I have done a few things that would classify as adventurous but that one hasn’t been ticked off my bucket list yet. Maybe we could do it together someday?

Thank you for letting me be.

Thank you Dad for never imposing your views on me. For letting me choose and make my own decisions. Thank you for being a true feminist and for always giving me the confidence that whatever happens, you will always stand by me.

I look at you today and am flooded with memories of our years together. Our evenings of singing songs for hours, ice cream Saturdays, swimming lessons, birthdays, holidays, the first slap, the hug right after, the fun and the laughter. All this and so much more that has flown past in a flash. Time slips through our hands quicker than we can imagine. As we grow old, roles reverse. Perhaps I worry a lot more about you now than you worry about me. I just don’t say it enough.

I will always be your little girl. Even though you don’t have the strength to carry me to the hospital in your arms like you did when I was thirteen, I know that however old that shoulder gets, I will always be able to lean on it and walk ahead.

I love you dad.

Posted by idletuesdayafternoonthoughts at 4:37 AM No comments:

Writer's Block And Then Some.... 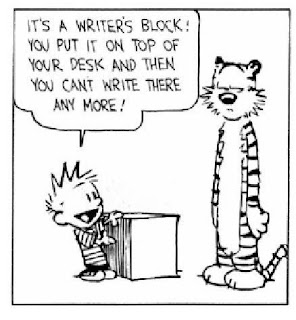 One of the worst things that can ever happen to a writer is being trapped in the box called the writer's block.
As each day passes the guilt of not writing grows cavernous roots until it engulfs the writer's entire being.
The soul fights for freedom so that it can vomit words on paper but the roots keep getting deeper and deeper.

A week ago over a pitcher of Sangria in a fancy Spanish restaurant I burst out crying and told my mother, “My writing is gone and for that one thing, I can’t forgive myself.”

It’s been months that I wrote something worth publishing on this blog. Most of the time I don’t feel like writing and when I do, I write gibberish as a sort of punishment to myself.

My mother, the eternal cheerleader, smiled and told me, “Like everything else, this will also pass.”

When life shakes the ground under your feet, after the surroundings have crumbled into tiny bits and the world has stopped spinning, you slowly start to build again.
Brick by brick you reshape the walls, crooked and not perfect, to make a new design. You restructure the foundation and sow new seeds.
You stand in the middle of it all and marvel at the beauty of life to survive and come alive again in the middle of destruction like the tiny shoots of grass that sprout underneath a frozen ground hoping that the sun will shine and melt away the sleet.

It was only whilst sipping sangria with tears rolling down my cheeks and watching the sun go down that I realized that my mom, as usual, was right.

Everything eventually passes. Time moves along and memories become flickers of dust that merge into space, omnipresent, but never visited, touched or felt again.

It is the hardest task to forgive yourself– to let go of things that you wish you had done differently, break the layers of darkness, let the sun inside shine through and emerge as a more loving and giving human being.

My garden, with seeds desperate to grow, hadn’t bloomed yet.

As the final drop of sangria finished and the North Star flickered brightly I decided it was time to take the key out of my pocket, open the box and fly.

Posted by idletuesdayafternoonthoughts at 5:50 AM 2 comments: