Mr. Apte and I (A Short Essay)


And then I can call my family and friends, ask them how their day was and tell them how lucky I am to have them in my life.
Please note: This essay is part of an assignment I am working on for The New School. It is part fact and part fiction. Mr. Apte did die with three loud thuds on the door, and I was too scared to come out. I have lived with the regret forever. I have added some drama here and there - I wasn't that intimidated when I moved to Pune, I haven't been home in months. But yes, the rain in Pune did fall like powder.
Posted by idletuesdayafternoonthoughts at 9:34 AM 2 comments:

When someone meets me for the first time, they don’t anticipate me to be the tattoo kind of girl. I got my first tattoo at 3am in the morning while partying at a tattoo artist’s home. It wasn’t a drunken mistake. It was an impulsive decision of something I had been thinking for a long, long time.

The best things in life often happen like this. You spend days and months thinking about whether you should or should not take that step and then one day something snaps. All of a sudden you find yourself right where you need to be and weighing the pros and cons isn’t even an option.

That is how my first tattoo, a Reiki symbol on my right shoulder happened seven years ago.

After the first one, I knew I had to get a second tattoo. For over a year ideas were playing in my mind - favourite song lyrics, symbols, signs, mantras.. etc but nothing was touching my soul.

A month and a half ago I finally figured what I wanted. I got my second tattoo today.

As soon as I put this up on Facebook, I got a lot of questions on what it represents. Why would I get the & symbol tattooed? 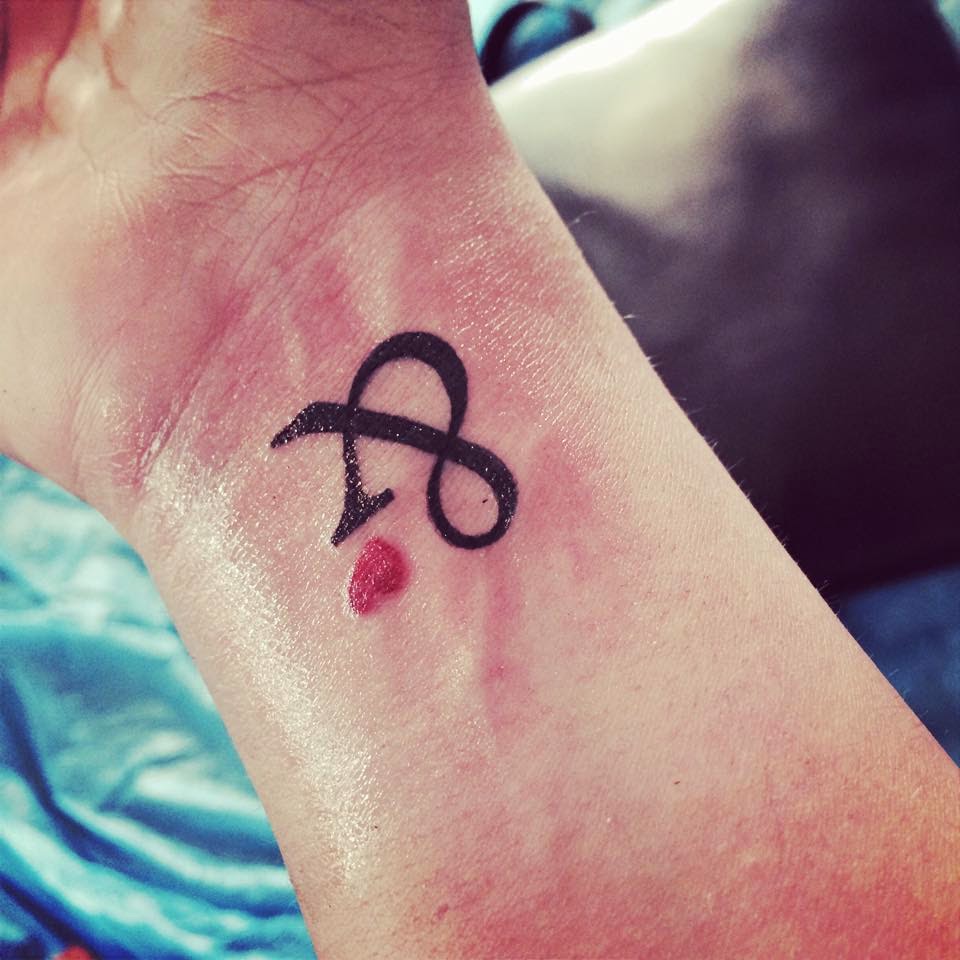 The Ampersand has a much deeper meaning for me than just being a conjunction. Because my life is an open book (or that is what a lot of people think due to the fact/fiction nature of this blog), here is what this tattoo means to me.

The word Ampersand is made up of two key words – Per se & And.
In Latin, per se essentially means by itself. My tattoo is a reminder to me that I am by myself through this life journey but there is always an ‘and’ so I should always keep the balance.

Secondly, the symbol signifies a broken infinity reminding me that nothing lasts forever but again there is always an ‘and’ …  more to what I can see. (I might just not know it yet)

Thirdly, according to me, it is one of the most beautiful symbols of the written language. It has evolved over the centuries taking different forms but essentially its purpose has remained the same.
I am a big believer in the cycle of the soul. To me this symbol represents the evolution into something beautiful, not just in this life but also over lifetimes. My tattoo will be a constant reminder to grow and chisel myself into the best I can be.

Fourthly, as a writer, this symbol is so, so important to me. I don’t think I could do without it!

Lastly the heart represents that I should never forget that whatever I do, however I feel and whatever life throws at me, I will still listen to my heart and I will always love unconditionally. Therefore the heart sits above the symbol.

I got this tattoo done in Vienna. Because travel is what I live for, getting this done while traveling in a country where my tattoo artist and I were communicating via sign language and intuition just makes it extra special.

He added his own special touch to it. The design I wanted had the heart straight on the ampersand pedestal. He made it a bit tilted. Apart from the fact he thought it flows with the design, he also said, I should always keep my heart flowing with love. (Or that is what someone translated from German  ;) )

Note: I got this tattoo done at Boris Tattoo Vienna.
Details can be found here - http://www.boristattoo.com
Appointments are needed - book in advance. The only person who speaks English at the studio is the lady at the reception called Marita!

For The One's Who Are Picking Up The Pieces.

For The One's Who Are Picking Up The Pieces.

When your heart shatters into tiny pieces, it takes a while to fix.
You pick up the little elements and try to glue them into a shape you once knew.
At first you run around bewildered, not knowing what to do.
After a while, like working on a puzzle, you start finding the pieces that go together.
Occasionally some harsh edges cut your fingers. You lose the plot again. The pain comes back.
There are moments when nothing seems to fit. And at times a lot of pieces come together perfectly.
Then one day, you take a step back and realize that it has started to look some what familiar.
You breathe and continue.
It will fix in time. They all tell you.
Deep down you know too.
It will be yours again.
Scarred, taped, glued, a bit untidy yet with an infinite capacity to love,
Just like it always has, always will.
Posted by idletuesdayafternoonthoughts at 8:52 AM No comments:

La Carboneria, Seville - A Journey Into The Soul 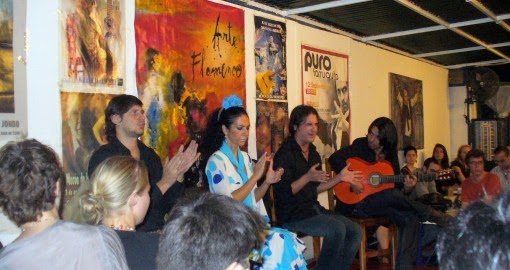 Hidden in the by lanes of the sleepy town of Seville is LaCarboneria. Part tapas bar, part performance space.

You might miss it, if you are walking aimlessly, trying to find a place to have an evening drink. La Carboneria commands to be found, it is a sort of institution that must be visited when in Seville. Ask a local and someone will lead you to a hidden red door.

What is behind the red door is not something you might not expect. Starting with a tiny room, the journey into La Carboneria takes you to a green, expansive courtyard.

The white washed walls are adorned with old paintings, a piano waits to be played and a stage stands bare awaiting someone to christen it with a dance.

The bar serves cocktails and tapas that are cheap and delicious. Tables are arranged to get the best view of the performances. It tends to get packed post 9PM when someone usually decides to dance. Get there early and grab a seat.

The performances are not like what you would see in the usual Flamenco performances custom made for tourists. These are raw, honest and deep performances by locals who love to express themselves through this art form. Be prepared for a lot of goose bumps or as in my case, a few tears. 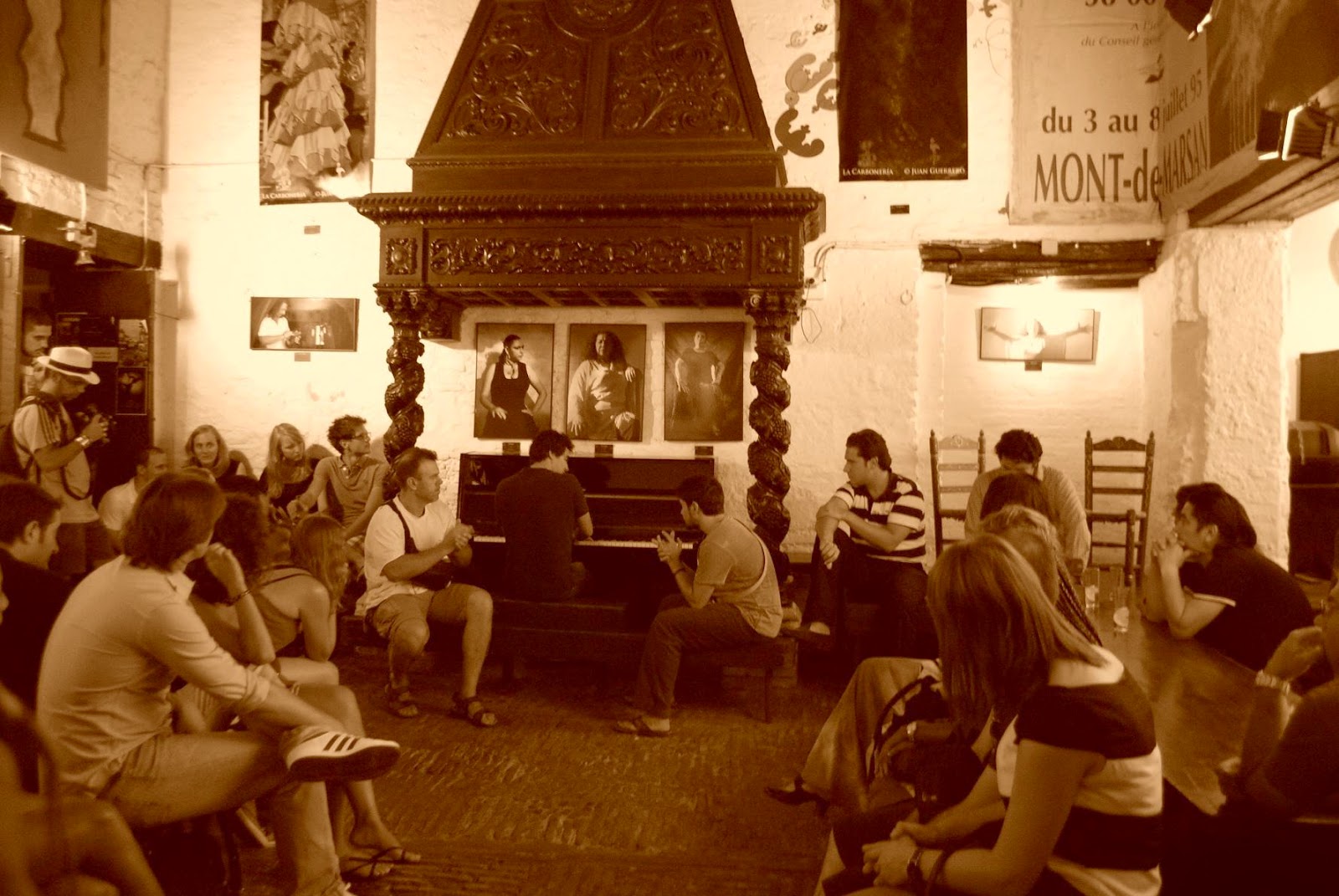 Once a few dances are over, the party moves to the other room where locals take on the piano. Sing along John Lennon in Spanish and a few songs you might remember from your childhood. People walk in and out of the red door, join in and then leave. Everyone seems to be welcome here. In a span of minutes you become a part of this community that is united with the power of music and dance. Language, nationality, colour … it’s all forgotten.

My experience with La Carboneria was enchanting and quite spiritual. Traveling has that effect on me… there are a few things that touch my heart and stay forever. Moments are permanently locked in the memory – sounds, taste, the exchange of glances…..

As I sat there sharing this moment with someone so important to me, I cannot forget an old lady getting up to dance the Flamenco a few times. Without any care of the world and lost in the moment, she danced as if it was the last time she could dance. Her husband sat there, with adoration and pride in his eyes, clutching a little plastic bag on his lap with her handbag, amazed at this woman who showcased such zest for life.

That is what I want to have one day (I thought to myself) A love and a zest for life that never ends…. Someone who thinks I am beautiful, dancing in the middle of strangers and kids young enough to be my grandchildren.

Anything else would be a compromise.

La Carboneria is etched in my memory along with so many other places I visited in Spain. It will always have a special place.

It is the kind of space that allows you to let go, be in the moment, feel music in your veins and even if it is for a few hours – Live like you have never lived before.

Details can be found here –

Here is the short video I took whilst there.... :)