If someone put in front of you a mirror today that reflected everything you have presumably become to the world. What would you do?

Would you buckle up and sprint in the other direction or would you continue to stare until what you see standing in front of you would dissolve into nothingness leaving behind mere fragments of someone you used to know.

Running is easy, convenient and simple. But every once in a while you need to take a break, face this mirror, look ahead at the road and ask yourself, “How long can I run?”

You need to take a breath and look back at the road to what was left behind, what was missed and what is now long gone.

Then sometimes at a one of rare occasion looking at that mirror, catching your breath and tying those shoe laces to get set go, you need to look inside deep into the core and ask yourself before you sprint, “How far will I run?”
Posted by idletuesdayafternoonthoughts at 10:36 AM 3 comments:

Last evening an amiable taxi driver started chatting with me on my five-minute ride home. I got to know he had been in the country for 22 long years, managed to go back to his country once every two years and every time tried to have a child. In his pursuit of producing kids he had successfully managed a 9 year old son, 2 year old daughter and a 3 month old son. He told me about how he has seen Dubai grow from nothing to the fairytale land that it is today, his issues with money and having three kids education and health to pay for.

A minute away from home he decided it was time he got to know my life story. So the first thing he asked me, “How long have you been married? How many kids do you have?” (in one sentence) for a second I was taken aback. Did I look married in a short skirt, blouse and jacket, all about in my corporate avatar in place or could he not imagine a single, independent woman could exist? However, not wanting to scandalize him, I decided to play along.

I told him I had been married for one year, my husband worked here and I hadn’t thought about kids because it was too early and I had no money to bring kids up. Thankfully, as soon as I finished my spiel we stopped in front of my building.

He looked back and with the most stern, serious eyes I have seen in a long time and told me that my biological clock was ticking. Money was in the hands of God and so were kids, both would eventually come with each other however my age wouldn’t come back.

My jaw, now almost in my lap took some time to adjust itself in place as I got out of the taxi and walked home.

Very often when I have gone out for social gatherings especially the ones infected by married couples, I have been asked where my Husband is. The taxi driver said it crudely, everyone else just sugar coats it.

When we are fresh out of college, we are told to make a career and stand on our own feet. Men can come later. By twenty-five we are at the edge of a social defined time frame labeling us as  – ‘Ready to get married.’

Post that it’s like a domino effect. Everyone you know is getting married year after year. Around the time you are thirty, you have lots of dressy wedding clothes worn once that now take up useless space in your wardrobe.

By then most women have fit into the second slot– ‘The married.’

Ever since the epic taxi ride I’ve been thinking, in the 2 prime decades of her life, are there only 2 slots a woman can fit into?

What about the ones who are happy and comfortable being alone?

Why do they need to explain the reason for their anchor not firmly parked in the confines of a socially defined term?

Where in the middle of the two slots do these women fit?

And so I wonder, with the clock in fast forward motion and new lines around the crows feet fast approaching, have we become so jaded that a white lie about a relationship status is way better than going through the a long, weary conversation on why despite having everything a man has and perhaps being more succesful, life is still incomplete without a ring on the finger?

One of those few things I like about Dubai, apart from the two months of winters, tax free income and availability of sheesha at every nook and corner is its ability to surprise me time and time again.

I have always said that Dubai is a transient city filled with mostly transient people. Lately I’ve been thinking that maybe like many others, this is a stop – gap city for me too and therefore I haven’t allowed myself to make it home.

But Dubai pushes me, to make her my own by showing me time and time again that she has that potential to have a character, a soul.

One of her attempts has been my introduction to a little farmers market tucked away near the JLT Lake.

Started a few weeks ago, this up coming farmers market is run by the organic food store – Blue Planet GreenPeople. 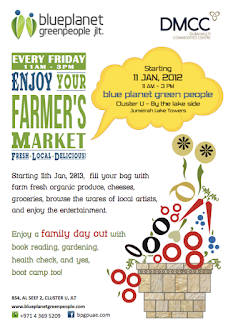 It can’t compete with farmers market across the globe where there are tons of stalls with fresh produce, colorful flowers and a buzz of activity. But this place feels like home. 10-12 stalls where everyone seems to know each other, everyone has a smile on their face and strangely which is unlike Dubai, everyone looks relaxed.

Blame it on the weather or its picturesque setting with the JLT Lake as a backdrop, the energy, warmth of the place and people makes you all smiley and happy. 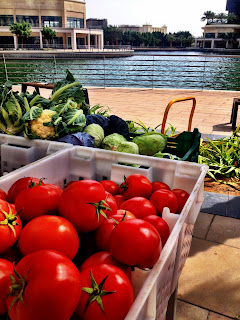 I ended up purchasing my weekly vegetables from the two organic produce stalls. Thinking about it now, the prices are almost the same as my neighborhood grocery but the quality is top notch. I can’t wait to make some yummy pasta tonight with the fresh basil and tomatoes I loaded up my shopping bag with.

I hope to see some fruit stalls the next time I’m there. (This might become a Friday ritual I think!)

A few other stalls that caught my eye and not just for the amazing stuff they were selling but also for the people who were selling it were – Pretty Jewelry – handmade jewelry by a very warm and friendly French teacher and Ayesha’s - Stems and Shoots. 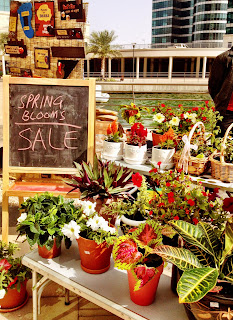 Ayesha, a young, single corporate executive or miss green fingers as you would like to refer to her actually grows and maintains plants in her balcony and then sells them to friends.

One of her lovely plants now adorns my balcony and is adding such amazing color to my home. 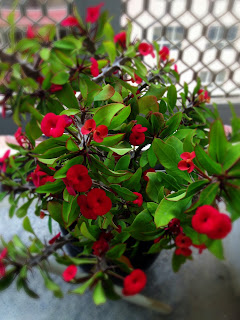 We spent the rest of the afternoon people watching at a Brazilian café next to the farmers market called Sweet Brasil tucking into scrambled eggs and fresh bread. 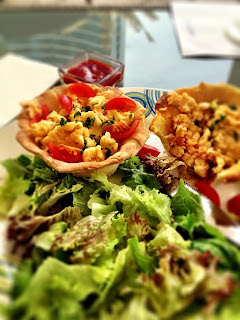 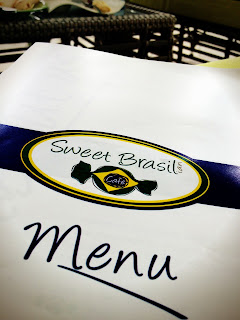 This place is a must visit for authentic Brazilian coffee and lovely, attentive staff. Owned by a lady who loves cooking Brazilian food, everything about the café speaks home, freshness and warmth.

We met some lovely people, exchanged numbers and email addresses promising to meet next Friday to do our weekly vegetable shopping and perhaps a shot of Brazilian coffee.

I recommend all you Dubai folk to get down to the market one weekend, let the kids indulge in free story telling sessions, have a laugh with some very friendly people and pick up some little knick knacks and some good veges.

The farmers market takes place at Al Seef 2, Cluster U, Jumeirah Lake Towers, Dubai.
Get in touch with the BPGP guys on their facebook page here if you want to participate in the market.
Contact Ayesha for some lovely plants on her facebook page here

Posted by idletuesdayafternoonthoughts at 9:49 AM 2 comments: